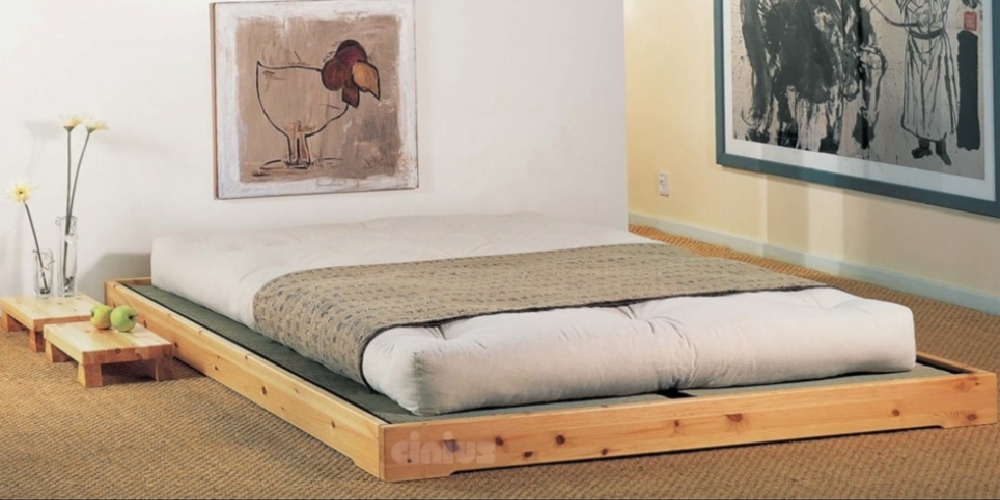 A japanese bed frame is popular for its minimalist design. A striking feature of a Japanese bed frame is that they are generally low to the ground. Traditional Japanese homes often have small living areas. This meant that their bedrooms would sometimes double as a living space during the day. At night, they either prepare a bed on the floor or create a bed design that is easy to fold or store away during the day.

This multifunctional bed soon became popular as they added lots of beauty to a bedroom décor. As experts in minimalist interior décor, it was only a matter of time before their beds would become popular.

While the concept of their bed frame design is understood, there are four main types of these Japanese bed frames.

These are the popular low designs from traditional Japanese bed space. They are simple with a low hanging bed frame. Although it uses the same design, modern bed manufacturers have included features to make them extra comfortable.

If you’ve ever heard or seen a futon bed frame and wondered where it originated from, the design was copied from ancient Japanese beds. Futon frame typically folds from a couch into a bed. As earlier mentioned, these were used in small living quarters. Ideally, they are better used today for spaces that are not large. Futon frame can be turned from a bed into a couch in less than a minute.

Tatami are Japanese mats or pads that are placed on the floor for sleeping. They act as a cushion for the body by providing comfort on the cold floor. Although a tatami bed is designed like a mat, modern tatami bed frames have a low hanging frame that holds the bed. Rather than a full-size, thick mattress, a pad is placed on the frame.

When should you replace your bed frame?

No other piece of furniture works the hardest in a bedroom like a bed. Beds can function tirelessly for years without us taking a closer look if they offer the same comfort as they once did. For many of us, replacing beds is done only when there’s significant damage to the frame. To get maximum comfort from your bed, these are warning signs that indicate a bed frame replacement is due.

The Japanese have invented several things, but the Japanese bed frame is the focus for today. Their bed frame is made popular because of its minimalist design and occasional multifunction feature. These Japanese beds have a low profile frame that gives them a unique look. Although there are several types of these minimalist beds, the post highlighted the three most popular frames and always discusses tell-tale signs to know when to make bed frame changes.

How Will the Fuel Filter Affect the Performance of An Engine?